Published On Date At Time By Raisin - Press release 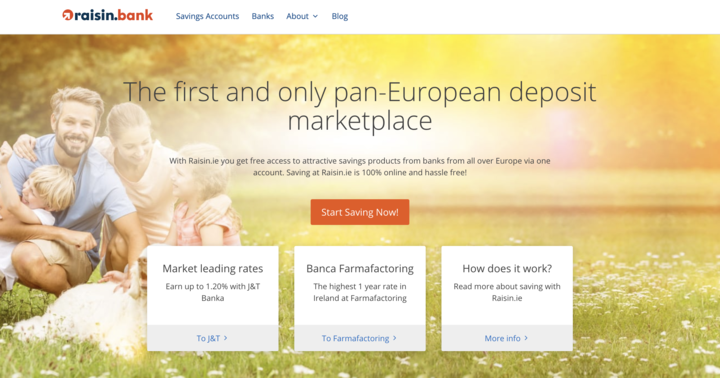 Berlin — 1. October, 2019. Cross-border savings and investments marketplace Raisin (https://www.raisin.ie) is live in Ireland, as of today. Raisin.ie launches with best-in-market interest rates on most term deposits, finally propelling Ireland out of last place on Europe’s retail interest rate ranking. Raisin deposit platforms recently surpassed €16 billion in total brokered volume since launch in 2013 and have delivered more than €115 million in interest to over 200,000 savers across Europe.

In Ireland, 42% of households have at least €100,000 in savings, in contrast to famously thrifty Germany where that number is just 34%, and the trend is only accelerating. Deposits have grown for the last 18 consecutive quarters, with Irish household savings increasing by €1.8 billion or 1.8% in the first quarter of 2019 alone. However, Irish savers have faced the lowest retail interest rates in Europe, blocked from earning more than on average 0.03% on their savings according to the ECB’s most recent data by stubbornly low local rates. Meanwhile prohibitive logistical hurdles have prevented Irish consumers from accessing higher rates in other parts of the European Union. At the same time, Irish banks collecting ever more deposits at near 0% rates had to pay €84m in negative interest penalties to the European Central Bank in 2018 due to the excess cash on their balance sheets. With Raisin.ie’s marketplace offering up to 1.2% on term deposits, Irish savers will have the opportunity to earn up to 3 times more on their savings. In addition, Irish banks will be able to provide their own customers with a range of deposit products by integrating Raisin’s offers into their own platforms.

The new savings platform for Irish savers is the first platform launched as a collaboration between Raisin Bank of Frankfurt and the pan-European fintech Raisin. “Raisin Bank is enlarging its focus on fintech and digital banking, areas driving the customer-centric direction of retail banking today. We were thus eager to take this opportunity to lead on the launch of a Raisin platform in such an important market. With the Raisin.ie marketplace, Raisin Bank is enabling Irish customers to significantly increase their profits on deposits by connecting them in a simple, transparent way to competitive offers on the continent,” explains Dr. Frank Freund, Chairman of the Supervisory Board of Raisin Bank AG and Co-founder of Raisin.

“By removing the barriers to access and collecting good deals from across the European Economic Area all in one place, Raisin Bank’s Irish platform aims to bring dynamism back into a huge sector of the economy: savings. We put more money into regular people’s pockets when we democratise deposits. So we’re thrilled to be able to offer Irish consumers the ability to earn real interest on their savings,” adds Alejandro McCormack, Business Development Manager for the Irish market at Raisin.